I was looking into projects I could do for my favorite game, Super Smash Bros. Melee that wouldn't be invasive to the actual gameplay. So, I had the idea to modify the character select screen (CSS) which included things like character portraits, colors, and music. The most interesting portion of this to me was changing the colors, so that's what this post will be covering. For reference here is what the original CSS looks like:

First you need the file that the game uses to store data for the CSS, this is the MnSlChr.usd which can be received by splitting an .iso (a Gamecube game file) file using a tool like GCRebuilder.

There are a few ways to go about reading and modifying the file, but this post will detail methods using hexadecimal. The MnSlChr.usd file contains a sequence of bytes that signify a specific format and these formats indicate locations of the following:

Formats can indicate other things, but that's out of the scope of this post as my project uses only 2 different formats, 07 07 07 and 42 48.

The transparency value for 07 07 07 format rarely ever does anything and in this project has no effect at all.

The 42 48 format identifier follows after the data.

This format can be made transparent by setting the 4 transparency bytes to 00 00 00 00, which can lead to some interesting visuals, which we'll get into later.

As there are 4,128,784 offsets in the file that contains the CSS data, finding the offsets that control what you want is tedious, it's mostly a process of trial and error where you

I found the offsets for this project through a combination of this method and sifting through forum posts from half a decade ago, finding only 1 relevant post with poorly written documentation, posted by me.

Here's a table of offsets that were used in the project:

Here's some input and output from the program I made, Melee CSS Color Changer, to show what these offsets control: 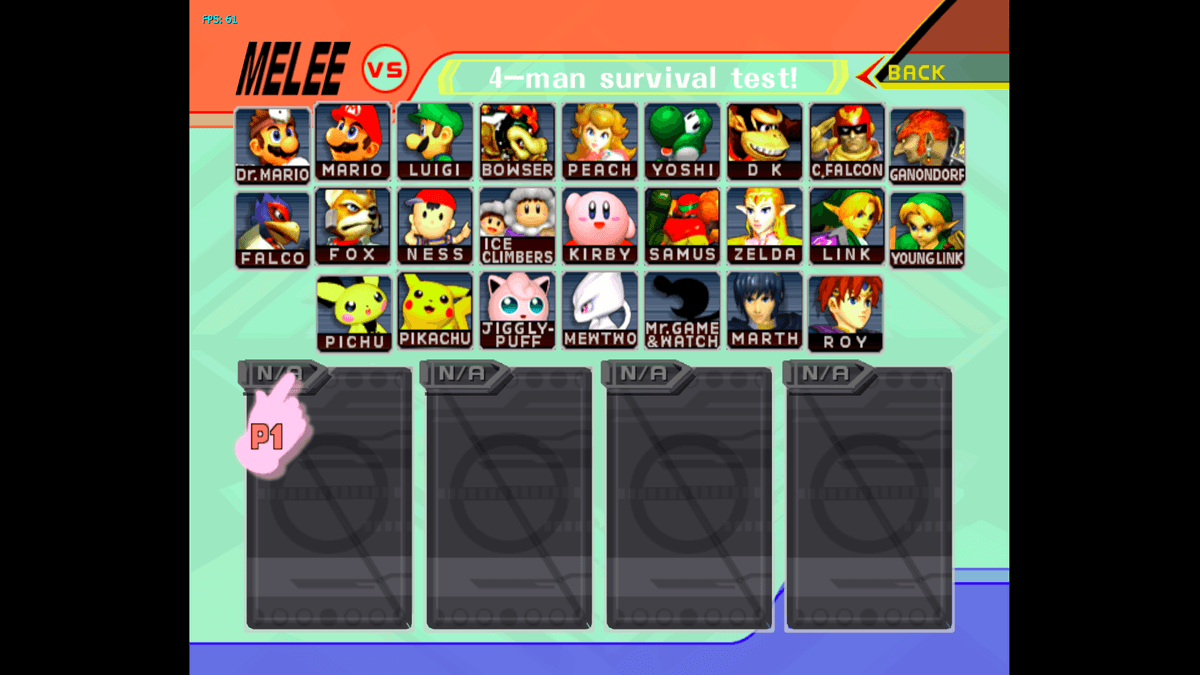 The "Selects in Background" aren't shown here because the "Background" masks them pretty well. In the next section we'll see how to get around that.

Writing Colors to the File

Once these offsets are found the color replacement is pretty simple. It's mostly just changing 2 colors (6 bytes) worth of data and sometimes making something transparent (4 bytes in 42 48 format).

The way I did this programmatically is by taking the starting offset and adding/subtracting hex to get to the correct position for primary color, secondary color, or transparency value and then writing to the file for the number of bytes required. I accomplished this through Java's RandomAccessFile object. Lets start with some basic code that changes the color of the top frame of the CSS, which is a 07 07 07 format offset:

Next we'll look at some code that makes the background transparent, which is a 42 48 format offset:

Now that our background is transparent we can see the once practically hidden selects in the background. There's 16 of them and each character ("S", "e", "l", "e", "c", "t") has it's own offset, so there's 96 offsets in total. Here's an algorithm to change all 96 of them with random colors:

Here's a possible result of running this:

Now that we know some of the algorithms that can be used to modify the CSS, here are some other examples that can be made using the program:

In general there's still much that can be done with Melee modding, more color offsets, tools for competitive players, features for casual play, animations, models, and more. If you're interested in getting started or seeing what's already been done head over to the Melee Workshop.

If you want to see the full code for this project you can take a look at it on here on GitHub.